About the Ruby-Throated Hummingbird

The male Ruby-throated hummingbird does indeed have a striking red throat, though the female of the species does not. 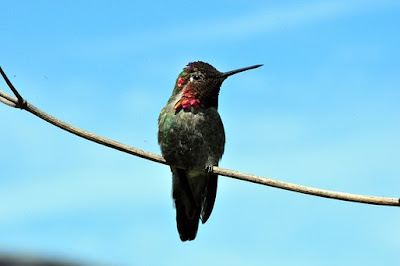 You would have to look quickly to see either, however, as these speedy little birds can beat their wings 53 times a second and fly in an acrobatic style matched by few other birds. They hover often, and also fly upside down and backwards. These hummingbirds have extremely short legs, so they cannot walk or even hop with any efficiency.

Habitat and Diet
Ruby-throated hummingbirds live in woodland areas, but also frequent gardens where flowering plants are plentiful. They hover to feed on flowers, nectar, and sap. During this floral feeding process, the birds pollinate many plants.
These tiny birds are omnivores, sometimes feeding on insects and spiders. An adult Ruby-throated hummingbird may eat twice its body weight in food each day, which it burns up with the high metabolism necessary to sustain its rapid wing beat and energetic movements. 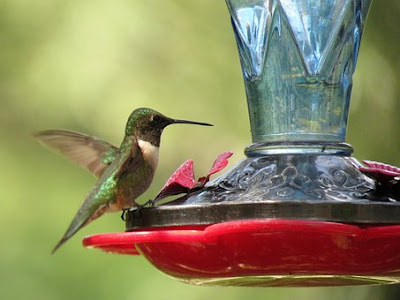 Reproduction
This hummingbird breeds in eastern North America and is the only hummingbird species to do so. Males establish a territory and court females who enter it with flying and diving behaviors, and by showing off their red throat plumage. Females provide all care for young hummingbirds. They lay one to three eggs, incubate them for about two weeks, and, after hatching, feed their young for about three weeks. A female may have several broods in a year. Ruby-throated hummingbirds are largely solitary outside of the breeding season.

Migration
Ruby-throated hummingbirds winter in Mexico and Central America. To get there from their North American breeding grounds some birds embark on a marathon, nonstop flight across the Gulf of Mexico. They may double their weight in preparation for this grueling journey.

Our hope is to be able to end each day in a beautiful way with a Grateful Heart. At the end of the day all we need is Hope, and strength to...